In a series of weekly short articles I’m discussing on LinkedIn some key ideas from recent talks I gave on the topic of Cognitive Data: https://www.slideshare.net/soeren1611/cognitive-data-122104948. Here you find the first three articles:

If we look back at the history of computing, we can see that IT technologies were initially very bound to the capabilities of the hardware, but became more intuitive and “human” over the past decades:

This, however, is not the end of the development. The problem with object-oriented programming is that functions and methods are more dominant and the data is often deeply hidden in the code or in data silos where the structure of the data is only known to a few experts. We currently see that there is increasing attention to data (e.g. big data, smart data, data science) – data is becoming more and more a first class citizen of computing. Still many challenges are ahead of us to realize the vision of cognitive data. We need to find and use more intuitive representations of data, which capture their structure and semantics in machine and human comprehensible ways, so that we develop a common understanding of the data along use cases, organizations, applications, value chains or domains. Knowledge graphs, linked data and semantic technologies are good candidates in this regard.

The three classic dimensions of Big Data are volume, velocity and variety. While there has been much focus on addressing the volume and velocity dimensions, the variety dimension was rather neglected for some time (or tackled independently). However, meanwhile most use cases, where large amounts of data are available in a single well-structured data format are already exploited. The music plays now, where we have to aggregate and integrate large amounts of heterogeneous data from different sources – this is exactly the variety dimension. The Linked Data principles emphasizing the holistic identification, representation and linking allow us to address the variety dimension. As a result, similarly as we have with the Web a vast global information system, we can build with the Linked Data principles a vast global distributed data space (or efficiently integrate enterprise data). This is not only a vision, but has started and gains more and more traction as can be seen with the schema.org initiative, Europeana or the International Data Spaces.

From Big Data to Cognitive Data

The three classic dimensions of Big Data are volume, velocity and variety. While there has been much focus on addressing the volume and velocity dimensions (e.g. with distributed data processing frameworks such as Hadoop, Spark, Flink), the variety dimension was rather neglected for some time. We have not only a variety of data formats – e.g. XML, CSV, JSON, relational data, graph data, … – but also data distributed in large value chains or departments in side a company, under different governance regimes, data models etc. etc. Often the data is distributed across dozens, hundreds or in some use cases even thousands of information systems.

The following figure demonstrates, that the breakthroughs in AI are mainly related to the data – while algorithms were devised early and are relatively old, only once suitable (training) datasets became available, we are able to exploit these AI algorithms.

Another important factor of course is computing power, which thanks to Moore’s law, allows us to efficiently process after every 4-5 years data being a magnitude larger than before.

In order to deal with the variety dimension, we need a lingua franca for data moderation, which allows to:

The Linked Data principles (coined by Tim Berners-Lee) allow us to exactly deal with these requirements:

For representing knowledge in graphs we need two ingredients, unique identifiers and a mechanism to link and connect information from different sources. Universal Resource Identifiers (URIs) and subject-predicate-object statements according to the W3C RDF standard allow exactly this. As we can build long texts out of small sentences, we can build large and complex knowledge graphs from relatively simple RDF statements. As a result, knowledge graphs can capture the semantics and meaning of data and thus lay the foundation for a data innovation architecture, as it is increasingly used in enterprises and larger organizations.

Let us look at the Linked Data principles (coined by Tim Berners-Lee):

Now, we want to look at how we can represent data semantically, so it can capture meaning, represent a common understanding between different stakeholders and allows to interlink data stored in different systems.

The basis of semantic data representation are URIs – Universal Resource Identifiers. Similarly as every Web page has its URL (which you can see in the location bar of your browser), URIs can identify every thing, concept, data item or resource. Here are some examples of some URIs:

Everyone (who has a domain name or webspace) can coin its own URIs, so you do not rely on a central authority (e.g. GS1, ISBN) as with other identifier systems. Since every URI contains a domain name, information about the provenance and the authority coining the URI is built in the identifier. It is important to note, that these URI identifiers can point to any concept, thing, entity, relationship, being it physical/real or abstract/conceptual.

Once we have a way to identify things, we need a way to connect information. The W3C standard RDF, follows simple linguistic principles: the key elements of natural language (e.g. English) sentences are subject, predicate and object. The following subject-predicate-object triple for example encodes the sentence “InfAI institute organizes the Leipzig Semantic Web Day 2018”:

As you can see, we use an identifier http://infai.org for “InfAI institute”, http://conf-vocab.org/organizes for the predicate “organizes” and http://infai.org/LSWT2018 as identifier for the object of the sentence “Leipzig Semantic Web Day 2018”. As we connect sentences in natural language by using the object of a sentence as subject of further sentence, we can add more triples describing LSWT2018, for example, in more detail, by adding the start day and the location:

As you can see in this example, a small knowledge graph starts to emerge, where we describe and interlink entities represented as nodes. You can also see, that we can mix and mesh identifiers from different knowledge bases and vocabularies, e.g. here the predicates from a conference vocabulary and the location referring to the DBpedia resource Leipzig. The start date of the event is here not represented as a resource (having an identifier), but as a Literal – the RDF term of a data value, which can have various data types (e.g. string, date, numbers).

Build on these simple ingredients, we can build arbitrary large and complex knowledge graphs. Here is an example graph describing a company:

Meanwhile a growing number companies and organizations (including Google, Thompson Reuters, Uber, AirBnB, UK Parliament) are building their knowledge graphs to connect the variety of their data and information sources and build an data innovation ecosystem.

There are some resources you might want to have a look at: 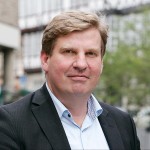