The AV-Portal (https://av.tib.eu), the video portal of the Technische Informationsbibliothek (TIB) – German National Library of Science and Technology, contains not only the latest scientific contributions, but also historic films, offering a glimpse of the history of technology and science.

In this post, we present a 30-year-old video from the year 1987, taken from the TIB collection area of (geo-)informatics. From the very beginning, this video, which was considered lost for a while, which is enjoying cultstatus among map enthusiasts, computer scientists and Star Trek fans alike.

The video called “GRASS – Geographic Resource Analysis Support System” gives a glimpse into the beginnings of the technological transition to digital maps and computer-aided spatial and landscape planning.

The elaboratelyproduced film was originally commissioned by the U.S. Army’s management program for natural resources to demonstrate the advantages of computer-aided planning to preserveecological aspects and archaeological sites on military training areas. To this end, viewers were recommended to use a geographic information system (GIS) called GRASS, for, as the narraror puts it: “..don’t keep your information…rolled up in map tubes, or stuffed into drawers, keep it in a computer .

From today’s perspective, the long-antiquated computer systems and storage media alone make the film worth watching. The rapid decline in the price of a single computer workstation – from around €100,000 (today’s equivalent) in 1987 to “just” €60,000 in 1989 – is also, in retrospect, a dramatic example of the continuously diminishing cost of computer capacity. The fact that only the cost of hardware was considered, and not that of software, is also worth noting: the GRASS GIS system, developed by governmental institutions, was a public good (i.e. in the public domain).

Apart from the technology, the soundtrack and the actors’ clothes and hairstyles help revive the spirit of the Eighties, conjuring up memories of Hollywood movies such as “Back to the Future” and TV series such as the likes of “Dallas” and “Dynasty”.

And yet you’ll search in vain for the furtive star who caused the film’s cult standing. He can only be heard: the narrator.

The intention of the suitably appealing, professional advertising video was to increase the number of users of the GRASS software. To achieve this, a very well-known, charismatic narrator was wanted. An ideal narrator was found in actor William Shatner, who gained world fame in the Sixties in the role of Captain James T. Kirk in command of the starship USS Enterprise. The second Star Trek movie “The Wrath of Khan” had hit the silver screen just one year earlier.

The advertising film was distributed to potential customers on analogue VHS video cassette. However, the film did not achieve the hoped-for success, due to unforeseen events: the publicly funded development of GRASS was subsequently shelved by the US Administration. The program code was handed over to universities in the USA as a public good for education purposes.

But the advent of global networking via the internet in the 1990s brought an unexpected turn of events: it then became possible to access the GRASS Software Archives from Germany – from Hannover, no less.

It was Markus Neteler, a geography student at the Institute of Landscape Planning and Nature Conservation of Leibniz Universität Hannover, who revived  GRASS in 1993 and transformed it into a community-driven software development project .

By then, the digitisation of mapped spatial  information described by the makers of the video had already reached Germany’s universities and academic education. But high licence fees were then being charged for the available geographic information systems, representing an obstacle to scientific curiosity. Access to software was a rare and regulated resource. The rediscovered availability of a “free” alternative in the public domain opened up new possibilities for innovation for students and teaching staff alike. And hence, originating from Leibniz Universität Hannover, the foundation was laid for the international triumph of GRASS GIS, which continues to this day. Aged 34, the software, now used globally in teaching, research and industry, is one of the longest living open source software projects.

Nevertheless, it seemed as though the GRASS video had been forgotten and lost in the process. It wasn’t until 2003 that a digitised version of the GRASS video was transferred from an old VHS cassette found in the archives by the original software developer, James Westervelt. As expected, the images and sound were rather blurred and noisy due to aged analog video tape. This version of the GRASS film was originally posted on YouTube, but was hard to locate, and could not be cited in accordance with scientific requirements.

An entire article on the GRASS video appeared in the technology magazine WIRED for net culture in 2013. In the article, reference was made to the cult factor, and to the lack of an official reference, such as in the internet database IMDb.

Based on this situation, the video was identified by TIB as a candidate for the AV-Portal for scientific films, which was being developed at the time.

Before a scientific film can be included in the AV-Portal, it is important to clarify the respective rights. TIB advocates publication under an Open Access licence, to ensure maximum free accessibility to the content, whenever possible. To this end, TIB contacted the producers of the video in the USA, who were keen to share detailed information about the history of the production, such as how they crossed the USA to Hollywood to work with William Shatner. The story took another unforeseen turn with a surprising find in the production archives, where a professional-quality video tape of the film was discovered.

This high-quality version is available in the TIB AV-Portal, and can be used as a scientific resource, enabling TIB to fulfil the long-cherished dream of geoinformation scientists, WIRED magazine and Captain Kirk/Star Trek fans. 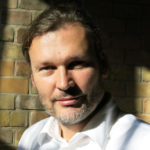