Till Adams, Chair of FOSS4G 2016 and General Manager of Bonn-based companies terrestris and mundialis, about the annual FOSS4G conference, the role played by recordings of conferences in the Open Source GIS community, and the advantages of publishing the videos in the AV-Portal of the German National Library of Science and Technology (TIB).

Till Adams, you were one of the organisers of this year’s FOSS4G conference in Bonn. What is the conference about?

“Have fun!” – those were the final words of my welcome speech at the FOSS4G 2016 here in Bonn. And at the start of the main conference, I could only hope that these words would be the ones that stuck in the mind of the FOSS4G 2016 participants …

Since 2006, the “who’s who” of the Open Source GIS community (GIS stands for geographical information systems) have met up once a year at the FOSS4G conference. In that sense, the Federal City of Bonn was the hub of the world for a whole week – from 21 to 28 August 2016 – for developers and users, decision-makers and all those interested in projects related to Open Source GIS software. But, as I always say, a FOSS4G is more than just a conference. A FOSS4G is an event and, as such, offers the best opportunity to meet countless members of the community, to present outstanding software products, to encourage new ideas, and to enjoy a couple of beers with acquaintances from all around the world. This was also clear from this year’s motto: “Building Bridges”. This was primarily meant as a guideline for action for those conference participants who were perhaps attending their first ever FOSS4G: building bridges – across the world to all those who use FOSS4G software, to other Open Source movements such as Open Data, to professionals and newcomers alike, to students and professors, and to business and to non-profit organisations.

The three-day conference, the centrepiece of the event, was also held at the venue in a dignified setting – the former Federation Chamber. But not only was the venue excellent – the weather, the programme and the social events, which also make a big difference at every FOSS4G, also were outstanding.

All in all, not only was it the biggest FOSS4G to date, it was also an event that many participants are not likely to forget in a hurry. And it goes without saying that, as the organisers of this conference, we will never forget it.

Why did you decide on recording the conference talks, and what do you do with the videos?

A FOSS4G is an international conference, and even though almost 900 people attended the event, the actual community is much larger. Although the possibility of being able to follow the conference programme via video cannot take the place of actually attending the FOSS4G in person, at least those unable to attend can view the recordings of the conference at any time of the day or night. This enables them to find out what’s new in the sector, in which direction the community is developing, or simply to check out the amazing software that is on offer.

But it’s great for the participants, too. After all, several tracks run in parallel during the conference, and as long as we’re unable to clone ourselves, we can only listen to one lecture at a time. Conference videos alleviate this dilemma.

How can the recordings be reused, and for what purpose? What role do they play in the Open Source GIS community?

All of the videos are available under a free licence and can therefore be used as required. Members of the community use the videos to train themselves. In some cases, videos of talks are also screened at one of the many regional conferences. Of course, a video is generally a much better document than when participants have to submit a long version – often under pressure, just before the deadline ends – or when you simply have the slides without preserving the spoken word.

What should a video portal for scientific videos offer, and why do you publish the recordings on the TIB AV-Portal?

The AV-Portal enables us to preserve ‘for eternity’ the videos for our community and the entire body of experts in this domain free of charge. What’s more, they can even be searched, meaning that videos can be cited precisely. A great possibility that no one thought about a few years ago.

For us, the AV-Portal is the ideal platform for enabling the reuse of all presentations. After all, at a conference of this size, the 200 or more talks and sessions are offered in parallel in up to seven tracks.

We would like to take this opportunity to thank the operators of the platform once again.

Till Adams was Chair of the FOSS4G Conference 2016, an international conference that is held annually by the Open Source Geospatial Foundation (OSGeo) since 2006. The aim of the foundation is to develop and use free and Open Source geographical information systems (GIS). This year, the conference was held in his hometown Bonn. Till Adams is an Open Source enthusiast, which led him to co-found the German-language series of FOSSGIS conferences and to join the first OSGeo conference in Minneapolis in 2005, which at that time was not yet called FOSS4G.

In addition, Till Adams has put a lot of effort into establishing and developing the local, regional and global community. He also helped establish FOSSGIS e. V., the legal entity of the German-language OSGeo branch, which he co-chairs.

Till Adams is the founder and General Manager of two companies in Bonn: terrestris (established in 2002) and mundialis (established in 2015). He was been working actively with FOSS4G software for more than ten years, and adds to the expertise of his companies with his experience, his contacts and links, and his profound specialist knowledge. He initially devoted his efforts to the early versions of GRASS (Geographic Resources Analysis Support System), but then became the technical architect of Open Source web GIS applications. 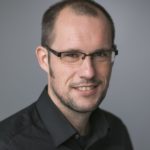